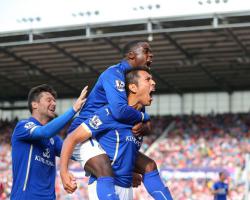 Leicester 5-3 Man Utd: Match Report - view commentary, squad, and statistics of the game as it happened.Five-star Foxes sink ragged UnitedManchester United's defensive frailties were laid bare in the most embarrassing fashion as Leicester romped to a 5-3 win over Louis van Gaal's shell-shocked side at the King Power Stadium.United's stellar cast of attacking talent allowed them to race into a 3-1 lead thanks to goals from Robin van Persie, Ander Herrera and Angel di Maria, who scored a stunning chip over Kasper Schmeichel.But, however impressive United's Galacticos are on the attack, the fact remains this squad is woefully sub-standard at the back and Leicester took full advantage to record their first home victory over the 20-time champions since 1985.Leonardo Ulloa headed in at the back post in the first half and David Nugent also found the net from the penalty spot after a needless foul by Rafael on Jamie Vardy.Esteban Cambiasso equalised on his full debut before Vardy slotted the ball past David De Gea after a counter-attack in which United's defence was all over the place.Tyler Blackett was then sent off for hacking Vardy down in the box and Ulloa converted the penalty to make it 5-3.The defeat brought Van Gaal back down to earth following his first victory against QPR last week

Much work clearly has to be done if he is to achieve his target of a top-three finish.QPR dropped deep and allowed United to come at them last week, but Van Gaal's men were not afforded the same luxury at the King Power Stadium as Leicester pressed from the first whistle.Jonny Evans denied Ulloa twice early on, first with a clever header and then with a fine block, which clearly hurt the centre-back.It did not take long for Di Maria to start causing trouble at the other end though.The former Real Madrid man drove at the Leicester defence and slotted Van Persie in behind, but Schmeichel ran out and blocked the Dutchman's shot.United were now in full flow

They looked particularly venomous down the left, where Marcos Rojo and Di Maria were proving far too quick for Ritchie De Laet.The former United right-back dived in and allowed full debutant Radamel Falcao, who started ahead of Juan Mata, to turn the ball past him in the 12th minute

The Colombian paused and chipped a pin-point cross to Van Persie, whose header flew past Schmeichel off Liam Moore.Just three minutes later, Di Maria doubled the lead with an early contender for goal of the season.The Argentine sprinted from inside his own half and picked a return ball up off Wayne Rooney before he scooped the ball over Schmeichel with his left boot.Van Gaal rose to his feet to commend the B#59.7million signing.Just 72 seconds later the United boss was cursing his defence as they allowed Leicester back into the game

Vardy got to the byline and whipped in a flat ball to the back post where Ulloa powered a header past David De Gea.United suffered a couple of injury problems before the break

Evans, still struggling after blocking Ulloa's early shot, hobbled off and was replaced by Chris Smalling.Di Maria also needed his wrist strapped after he was brushed off the ball by De Laet.There was no sign of the impending meltdown in the rest of the first half

Smalling, Daley Blind and Blackett all looked sturdy at the back.United should have had their third just before the break when Rojo headed over from four yards.Within three minutes of the restart Falcao had rattled the bar with a fine volley.Herrera went one better in the 57th minute, as he turned the ball in to make it 3-1

The Spaniard cleverly flicked Rooney's goal-bound shot past Schmeichel from six yards after Rafael caused havoc in the box with a wicked low crossThe Brazilian quickly went from hero to villain though as he gave away a contentious penalty at the other end.Vardy barged Rafael off the ball down Leicester's left and the defender lost his cool, nudging over the forward in the box.Mark Clattenburg ignored United's protestations and pointed to the spot

Nugent blasted the ball down the middle past De Gea to score.Within two minutes, United's defence went to pieces again and Leicester equalised.Dean Hammond, given plenty of space on the edge of the box, saw his shot blocked in the centre of the area where Cambiasso pounced, stabbing the ball past De Gea.Van Gaal slumped further into his seat with 12 minutes left when Leicester, amazingly, took the lead.De Laet nicked the ball off Mata, who had just come on for Di Maria, and cantered down the left back before finding the unmarked Vardy, who calmly beat De Gea.Yet more shocking defending was to come from the visitors

Vardy easily nudged Blackett aside and raced towards the box, only to be brought down by the young centre-half with an awful tackle from behind.Mark Clattenburg had no option but to send Blackett off