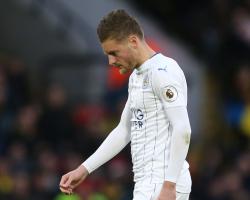 Alvaro Negredo had twice put them ahead, with Riyad Mahrez levelling in the first half with his own penalty, but Slimani's last-gasp spot kick saved the Foxes.

They may have qualified for the Champions League last 16 in midweek but they were poor against vibrant Boro, who gave them a huge scare, and are two points above the relegation zone.

Nothing should be taken away from Boro's performance though after they dominated most of the first half, soaked up pressure after the break and hit the Foxes with what looked to be a sucker punch

Claudio Ranieri admitted pre-match he needed to ring his imaginary bell to wake the Foxes up from their slumber but that warning was not heeded and subdued City paid the price when Boro took a deserved lead after 13 minutes.

He spread it to Gaston Ramirez and timed his run to meet the Uruguayan's low cross and sweep the ball into the top corner from 16 yards.

Sharp in possession and hard-working without the ball, Boro presented a tougher challenge than Club Brugge as Leicester, without the banned Danny Drinkwater, allowed them time and space to continue to dominate

The previously quiet Mahrez tricked his way into space in the area and delivered a cross for Okazaki to produce a wonderful improvised overhead kick from 12 yards which hit the top of the bar.

It lifted Leicester and they levelled four minutes later in controversial fashion through Mahrez's penalty.

Danny Simpson launched a deep cross and Calum Chambers, who had just been booked for catching Jamie Vardy in the face, handled under pressure from Wes Morgan

Morgan had certainly given Chambers a shove and referee Lee Mason took an age to decide but eventually awarded the spot kick and Mahrez fired in his seventh goal of the season off the post.

Marc Albrighton headed over after 62 minutes and Ranieri turned to record B#30million buy Slimani with 25 minutes left as he replaced Vardy, still looking for a club goal since September 10.

But just as Leicester were starting to edge the contest Boro went ahead again with 19 minutes left with Negredo's second.

The Foxes were completely caught out by Adam Forshaw's ball over the top and, with Christian Fuchs playing Negredo onside, the striker raced into the area and planted a fine angled finish past Zieler

But the Foxes levelled in the third minute of added time when Morgan was fouled in the box by De Roon and Slimani sent Valdes the wrong way.