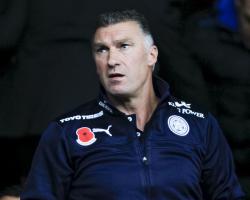 Leicester 1-3 Liverpool: Match Report - view commentary, squad, and statistics of the game as it happened.Gerrard inspires Foxes triumphLiverpool may want to re-think the contract offer made to Steven Gerrard after their captain bailed them out in a 3-1 comeback victory over Leicester like he has done so many times in the past.The former England midfielder's current deal expires in the summer and, despite the offer of an extension, he has yet to commit to stay at the club he has been with since he was nine.But while Gerrard may be deliberating his next move, reportedly wanting double the one-year contract on offer, he showed no hesitation on the pitch with a coolly-placed goal to set his side on the way to victory and provide a reminder of glory days gone by.Restored to the starting line-up after being rested against Stoke on the 16th anniversary of his debut at the weekend - and now relieved from defensive duties in a more advanced role - the midfielder responded with his first goal in open play since the Merseyside derby at Anfield in January.That completed the comeback after Adam Lallana had equalised goalkeeper Simon Mignolet's unfortunate own goal in the first half and, when Wes Morgan was shown a red card, Jordan Henderson secured back-to-back Premier League victories for the first time since October.A week can be a long time in football and in the space of seven days Gerrard and Mignolet have both experienced highs and lows.Having been at fault for Ludogorets' opener in their Champions League draw in Bulgaria last Wednesday the Belgium goalkeeper looked to have turned a corner with a clean sheet at the weekend.However, the jitters which have become more frequent with every passing game and gradually infused his team, resulting in a side which resembles the consistency of jelly when put under pressure, returned quicker than you could say "goalkeeping howler".His inexplicable pass straight into the path of Esteban Cambiasso, who rolled a 25-yard shot just wide of an open goal, set the nerves jangling and within two minutes Leicester were in front thanks to more weak defending.It was unlucky in some ways as Mignolet made a good save when Jamie Vardy raced on to Riyad Mahrez's through-ball

But from the rebound Martin Skrtel could only weakly head out Ulloa's follow-up and the striker was given enough time to collect the ball and smash a shot against the near post which cannoned off Mignolet's head and into the net.Liverpool's response was almost instantaneous; Gerrard's free-kick was half-cleared to Lucas Leiva whose cross dropped at the feet of Lallana off Morgan and he smashed home the 50th league goal of his career.The former Southampton midfielder, returning to the starting line-up, had looked neat and tidy with the ball at his feet but his wild lunge at Vardy, for which he was booked, a few minutes later was anything but.In the first half Gerrard struggled to have much influence in a pin-ball midfield and it was Leicester's own veteran midfielder Cambiasso, also 34, who exuded an air of calmness and control.At the break Reds manager Brendan Rodgers made a tactical switch taking off Javier Manquillo, switching Glen Johnson back to right-back and bringing Alberto Moreno in on the left but it was a change he made last week which was more pivotal.Against Ludogorets the captain was restored to an advanced role he previously occupied with great success in an attempt to allow Lucas to come in and provide more solidity.And it was the Gerrard of old who strode into the penalty area in the 54th minute, having been involved in the build-up, to caress a shot past Kasper Schmeichel after Morgan could only dangle a foot at Raheem Sterling's cross.It got worse for the Leicester captain when he was red-carded just past the hour for hauling down Rickie Lambert as the Liverpool striker managed to get beyond him.However, from the resulting free-kick the hosts launched a swift counter-attack and Gerrard showed he still had some life left in those ageing legs by charging back and using his experience to commit a cynical foul on Matty James before he could do too much damage.Leicester were lucky not to be down to nine when Schmeichel collided with Gerrard inside the penalty area after he sprang the offside trap to race through - but referee Lee Mason waved play on.Equally, the Foxes were unlucky when Cambiasso's deflected shot was diverted wide by team-mate Vardy but by now Gerrard was relishing the open spaces and his cross to Sterling produced the cut-back for Henderson to score the third.And no prizes for guessing who headed clear a corner in added time

As messages go it appeared to say "I'm not finished yet"