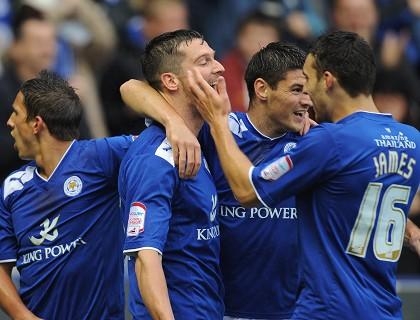 Burnley's Danny Ings enhanced his growing reputation as his 16th goal of the season ensured the top-of-the-table clash with Leicester in the Sky Bet Championship ended all square.


Ings, rumoured to be a transfer target for Barclays Premier League clubs next month, scored Burnley's equaliser right at the start of the second half to keep the Clarets at the summit ahead of the Saturday afternoon kick-offs.


It looked like Leicester would jump from third to first place after David Nugent scored against his former club from the penalty spot early on at the King Power Stadium.


The Foxes began on the front foot and Burnley survived a couple of early scares.


Kieran Trippier blocked a goalbound effort from Lloyd Dyer in the third minute following good work down the right-hand side by the fit-again Ritchie De Laet.


Shortly afterwards Clarets goalkeeper Tom Heaton was in the right place at the right time to block a well struck volley from Anthony Knockaert which whizzed through a crowded penalty area.


Leicester were rewarded for their early pressure after 14 minutes following a mistake by Jason Shackell, who gave the ball away to Nugent deep inside his own half.


Nugent put Jamie Vardy through on goal with a pass into the area where the striker was sandwiched by Shackell and former Fox Ben Mee.


The referee pointed to the penalty spot and Nugent netted against Burnley for the fifth time in his last six games against his old club.


The Clarets came close to an equalising goal midway through the first half when Ings' glancing header from an inswinging Trippier cross clipped the outside of a post.


Leicester missed a couple of chances to extend their lead as the half-time whistle approached.


Vardy pulled a shot agonisingly wide from inside the box before captain Wes Morgan and fellow defender Liam Moore were both inches away from getting on the end of a beautifully-flighted free-kick from Knockaert.


Ings then volleyed wide from the right-hand side of the area.


He made no such mistake at the start of the second half, though.


Burnley were level just 90 seconds after the restart as the Leicester defence allowed Trippier's cross to bounce inside the box and Ings contolled the ball on his chest before guiding a shot past the helpless Kasper Schmeichel from eight yards out.


Sean Dyche's side should have gone ahead after 52 minutes when a terrible mistake from De Laet saw Sam Vokes through one-on-one with Schmeichel, but the Dane spread himself big to save Vokes' lifted effort.


Back at the other end, Dyer dug out a terrific cross just before the hour mark but Nugent could not rap his foot around the ball at an awkward height and his volley went over the crossbar.


Another Dyer cross presented Vardy with a chance to put Leicester back in front with 12 minutes remaining but he did not get the proper contact on his header from six yards out and the ball drifted past the post.