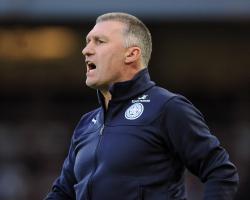 The Foxes confirmed the signing of Kramaric on a three-and-a-half-year contract last week, but since then have been waiting on the Home Office to grant the 23-year-old a work permit.

City have been made to sweat as Kramaric does not qualify initially due to the fact he has not made enough international appearances over the past two years.

However, Kramaric has been capped at every level from Under-14 up to Under-21, whilst his four appearances at senior level have yielded two goals.

Pearson, who last week claimed Kramaric "has a very bright future", would like to think the permit will come through in time for him to face Stoke at the King Power Stadium.

"We're still waiting for the official confirmation on Kramaric and hopefully that will be confirmed before Saturday," said Pearson.

"As to whether he plays, that depends on whether we get the official clearance, but he is in contention.

"I'm no legal beagle, I don't know the ins and outs, but we have the backing of the federation (Football Association) and hopefully we will get the official work permit."

Pearson, though, refused to shed any light on his club's attempts to lure Scotland international midfielder Shaun Maloney from Wigan.

It is understood a fee of just over ÃÂ£1million has been agreed between the two clubs after City's initial offer was rebuffed.

Despite Leicester seemingly closing in on their latest acquisition, a guarded Pearson said: "I'm not in a position to comment further.

"The reason for that is if things don't happen then the player has to perform for his current club, so it's unfair to talk openly about that."