Pearson has high hopes for Kramaric 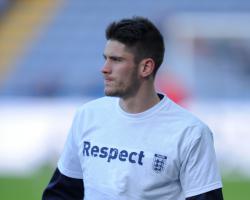 It was a tale of two strikers at the King Power Stadium, with Bojan underlining his growing pedigree and confidence with a classy finish for the only goal of the game in the 63rd minute to end Leicester's four-match unbeaten run.

The 24-year-old joined Stoke in the summer for what is now rapidly becoming a bargain ÃÂ£3million following a tour of some of Europe's greatest names - Barcelona, Roma, AC Milan and Ajax.

However, Potters boss Mark Hughes concedes Bojan was "initially taken aback" by the Premier League and it took the Spaniard time to find his feet.

Pearson, though, does not have time as he ideally requires Croatia hot-shot Kramaric to hit the ground running if bottom-of-the-table Leicester are to avoid relegation.

After obtaining a work permit on Friday - eight days after his arrival was initially announced - Kramaric was given a 25-minute cameo for his debut, coming on just two minutes after Bojan had scored.

Unfortunately for Kramaric, his maiden appearance came on a day when the Foxes lacked any creative spark and he barely saw the ball.

Pearson, though, was at least happy Kramaric was given a taste of what is to come, with an FA Cup tie with Spurs and league matches against Manchester United, Arsenal, Chelsea and Manchester City on the horizon over the next few weeks.

"There's going to be interest, of course, because of his arrival," said Pearson.

"He's a goalscorer and his record bears that out, but we didn't really create too much in the last 20 minutes or so.

It's never easy to quantify what he's capable of.

As Pearson rightly pointed out, "it was a bit of quality that won it for them (Stoke)", with a back-to-the-goal Bojan taking a ball from Jonathan Walters on his right foot, turning and firing past Ben Hamer from 17 yards with his left.

It was Bojan's fourth goal of the season to give Stoke their fourth away win on the road this campaign, meaning they have a better away record than they do at home.

Bojan knows the club has to improve at the Britannia Stadium if they are to make further strides up the table from their current 10th place.

Speaking on Sky Sports and via team-mate and translator Marc Muniesa, Bojan said: "I'm happy because we won an important three points and I helped the team with the goal

That's important for me and the team.

I'm feeling comfortable here in Stoke and I will be improving.

"Now we have to be a bit stronger at home

If we can improve the little details we were missing in the first half of the season then we will finish in a good position."

Hughes said: "There's a deal on the table with further talks scheduled, so hopefully something will be resolved quickly."