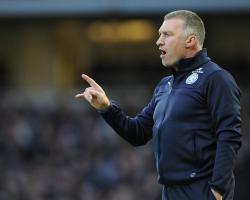 Captain Wes Morgan was incorrectly penalised for handling when the ball struck his face while Pearson felt the decision against Danny Simpson for the second spot-kick was also harsh.

Steven Gerrard scored both penalities and although Leicester fought back with two goals in 100 seconds after the break from substitute David Nugent and Jeffrey Schlupp, the Foxes boss was unhappy they found themselves in a difficult position due to officiating errors from Mike Jones.

"It is going to fuel the debate again about use of technology because we (the Leicester dugout) have the benefit of being able to see it in a few seconds and know what has happened and it is unfortunate to have to deal with two occasions like that in the first half.

"I am not going to go down the route of being ultra-critical because at the end of the day the game could be a lot easier by utilising what is available to us, but we don't."

On Simpson's penalty he added: "It hit his hand but it is how the rules are interpreted and whether there is a level of consistency.

"You can see from the player's reaction it is unintentional but I fully accept it hits his hand.

"There were other occasions at both ends where you could say if that one is given why aren't the others.

"This is the problem the game has

It exposes human beings to making errors - that is not a criticism of the officials but we could make it much easier for everyone concerned if technology was utilised.

"It takes a couple of seconds

Even when the whistle has gone and players are remonstrating with the officials it could be reviewed instantaneously.

"It (introduction of technology) is not inevitable but do I think it should be there, yes."

The debate over technology overshadowed what was an impressive comeback by the bottom-of-the-table visitors.

"I was pleased with how we played throughout the game," said Pearson.

"We showed our intent and it is unfortunate we had to deal with a couple of disappointing moments in the first half."

Liverpool manager Brendan Rodgers accepted his side had not been good enough to hold onto a lead and a point was all they were worthy of.

He said: "I thought we got what we deserved in the end

"We are obviously disappointed at being 2-0 up as the first goal we gave the ball away so cheaply and did not defend well enough.

"It was interesting because we had a plan in place in terms of after the opponent scores or after we score - that five-minute spell where we have an idea of what to do - and unfortunately we failed to do that.

"Today we weren't tight enough on the ball, didn't keep it for long enough and our passing was slower than normal.

"We didn't start the game well and were fortunate to get a penalty, which gave us confidence."