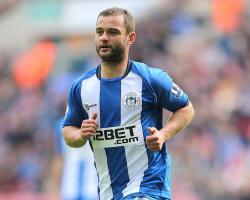 Leicester V Stoke - view commentary, squad, and statistics of the game live.Albrighton vows to prove his worthMarc Albrighton has vowed to prove he is not Leicester's forgotten man.The winger is poised to face Stoke at the King Power Stadium on Saturday as he bids to finally establish himself at the Foxes.He made just his second start of the season against former club Aston Villa in the 1-0 win last weekend.The form of Riyad Mahrez and Jeff Schlupp has limited him to just 292 minutes of action this term.But Mahrez is now on African Nations Cup duty with Algeria and Schlupp is sidelined with a knee injury which forced him to miss out on Ghana's squad for the tournament in Equatorial Guinea.Albrighton is determined to take his chance after revealing he has found it tough following a free transfer from Villa last summer.He said: "It's been frustrating for me personally because I came here with the aim of starting more games

There is only so many times you can go knocking on the manager's door to ask him the same thing."For whatever reason it's not worked out at the moment but I have kept my head down, waited for my chance and I have signed here for four years so I'm not going to rush into anything."I am enjoying it now, the last two games I've played have been great."Leicester could have new striker Andrej Kramaric in their squad after he was granted a work permit to finally complete his move from Rijeka.Kasper Schmeichel and Matt Upson (foot) are out along with the banned Matty James.Dean Hammond (calf) and Esteban Cambiasso (hip) are doubts but Danny Drinkwater is available after a groin problem.Stoke full-back Erik Pieters is a doubt but midfielder Steven Nzonzi should be available.Both players came off at half-time with groin complaints during last Sunday's 3-0 loss at Arsenal

Victor Moses returned to the matchday squad at the Emirates Stadium as an unused substitute and looks set to make his playing comeback this weekend following a thigh injury.Forward Mame Biram Diouf remains on African Nations Cup duty with Senegal.Boss Mark Hughes is excited by the prospect of Stoke having Moses and Bojan Krkic both fit and firing on the field at the same time.Following his summer arrival from Chelsea on a season-long loan deal, winger Moses established himself as the Potters' star performer in the early weeks of the campaign before he was sidelined by a thigh injury sustained towards the end of November.It was at that point that forward Bojan - a summer signing on a permanent deal from Barcelona - was just beginning to really show what he can do in a Stoke shirt, and he has subsequently emerged as their key attacking player in Moses' absence.Moses made his return to the matchday squad as an unused substitute when the Staffordshire outfit suffered a 3-0 Barclays Premier League defeat at Arsenal last weekend, and he looks set for his playing comeback in Saturday's top-flight trip to Leicester.And Hughes said of the Nigeria international: "He is very much in my thoughts for the weekend and hopefully, if he does play, he will be able to hit the performance levels that he was reaching prior to the injury, because he was arguably our best player."Thankfully Bojan had come into the team around the same time and took over that mantle, leading from the front with his level of performances."If we can get them both firing at the same time, then we should be in good shape."Hughes' 11th-placed side take on a Leicester outfit who are bottom of the table.The Foxes were in that position on Christmas Day, and there have only been two seasons in Premier League history where the side in that predicament have gone on to avoid relegation.Hughes sees it as a "tough call" as to whether or not Nigel Pearson's men - currently three points adrift of safety - will be able to beat the drop.But he has no doubt they will face Stoke in buoyant mood after defeating Hull and Aston Villa either side of drawing at Liverpool in their last three league games."It is a tough call - historically it is difficult to stay up when you have been bottom at Christmas," said Hughes, whose team were beaten at home by Leicester in September."But it has been done in the past, and they will be encouraged by virtue of their last few games, when they have gone up against good teams and given a good account of themselves and, more importantly, picked up points."