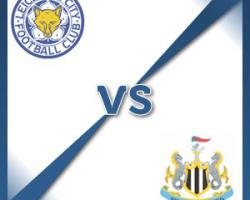 Leicester V Newcastle - view commentary, squad, and statistics of the game live.Drinkwater out for LeicesterLeicester manager Nigel Pearson will make changes for the FA Cup third round visit of Newcastle.Midfielder Danny Drinkwater misses out after injuring a groin in Thursday's 2-2 draw at Liverpool.Defender Paul Konchesky returns from suspension while midfielders Jeffrey Schlupp and Riyad Mahrez are available for their last match before the African Cup of Nations.While a win against Newcastle would provide an important confidence-booster the Foxes boss believes his side have already shown they can compete against established Premier League clubs."It is fair to say we have made a number of changes through this period of games but there is no right or wrong way to do it," he said."To play against Newcastle at home gives us the chance to build on some decent results but it is inevitable there will be changes."But throughout the season I don't think you've heard me talk about disappointing performances."It is never easy to sell the idea to people that the belief and commitment is there and we think we are good enough."It is about results and we had a testing second half to 2014 and we have to see what we can do for the remainder of the season."As a side coming up it is never easy to compete at the same level against established Premier League clubs but all the sides who were promoted last season have shown ability over the last few weeks to get results."We have to try to build on that

We are still not in a great position but we have to build on the positives we have had and not concentrate on what people are saying."It is important to stay in touch but at the same time we have to make up ground."John Carver knows exactly how desperate Newcastle's fans are for a return to the glory days - because he is one of them.The Magpies embark upon a new FA Cup campaign almost 60 years since lifting the famous trophy for the last of six times in their history, and have not won domestic silverware since.Carver, currently serving as interim manager at St James' Park with Alan Pardew awaiting confirmation of his appointment at Crystal Palace, was not even born when Jackie Milburn's first-minute goal set Newcastle on the way to a 3-1 victory over Manchester City at Wembley on May 7, 1955, their third triumph in five years.However, having witnessed final defeats in 1998 and 1999 as a both a fan and a member of the coaching staff, the 49-year-old is acutely aware of what the competition means on Tyneside.Carver said: "I know exactly how much it means to the fans to have a cup run because I am one of them

I have been to a cup final and a semi-final and I will never forget that reception."Although we lost to Manchester United (in 1999), when we came out of the tunnel at Wembley and our fans were behind the tunnel, it was quite emotional, so I know exactly what it means."I have actually been in the stands when we lost to Arsenal (in 1998), so I know what is it like and how important it is, so to get back there is one of the most important things in my eyes."In four years as Newcastle boss, Pardew managed victory only once in five FA Cup ties with League Two Stevenage and Championship Brighton twice inflicting giant-killing misery on his team and Cardiff winning at St James'.The club has made no secret of its concentration on the Barclays Premier League as the main priority, much to the annoyance of fans who have seen the likes of Middlesbrough, Wigan and Swansea win trophies in recent seasons, but Carver insists he will field the strongest team he can at the King Power Stadium.Carver said: "Four years ago, I was in Tenerife watching the game against Stevenage and let me tell you, I was really disappointed - and I had a few beers as well."Listen, there has been an awful lot made about cup runs, so let me say this: every game I go into, I want to win, so I will put the best team on the pitch that I possibly can to win the game."