​Brendan Rodgers takes his rejuvenated Leicester City side to recently relegated Huddersfield Town on Saturday afternoon looking to continue the club's fine run of form since he took charge.

The 46-year-old is five games into his new role and has overseen four victories, including the last three on the bounce. With his side in an excellent run of form and no new injury concerns to worry about Rodgers is likely to keep a settled side as they look to make it four wins out of four this weekend.

Here is how the Foxes could line up for Saturday's ​clash at the John Smith's Stadium. Kasper Schmeichel (GK) - The team's undoubted number one has had another solid year between the sticks and will be looking to make it consecutive clean sheets on Saturday.

Ricardo Pereira (RB) - The 25-year-old has been an excellent acquisition at right back, being a major attacking threat and contributing two goals and four assists whilst also proving reliable defensively, making over 100 tackles in the league this season.

Jonny Evans (CB) - The Northern Ireland international has been his usual steady self for the majority of the season and should keep his place ahead of captain Wes Morgan against Huddersfield. As expected, he has proved a bargain at £3m.

Harry Maguire (CB) - The England defender is expected to come straight back into the side after his red card at Burnley caused him to miss the win over Bournemouth, despite Morgan scoring in his absence.

Ben Chilwell (LB) - His consistently excellent displays over the last 18 months has seen the young defender emerge as England's first choice left back. Rumours of a move to Manchester City won't go away but Leicester will be desperate to keep him. 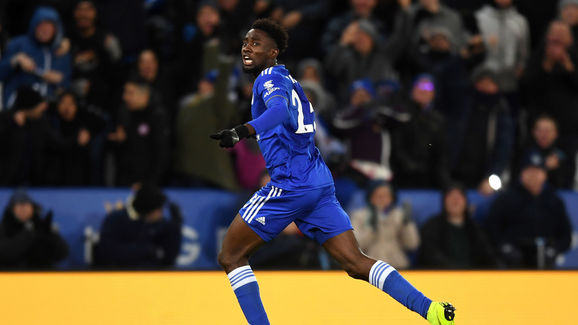 Wilfred Ndidi (CDM) - The Nigerian midfielder has established himself as the first-choice holding midfielder at the club and it will be his use of the ball which will be key against Huddersfield at the weekend, with Leicester likely to have the majority of possession.

Demarai Gray (RM) - The England Under-21 international has been given plenty of opportunities this season and should retain his place in the side as he looks to add to his four goals in all competitions.

Youri Tielemans (CM) - The Belgium midfielder has been excellent since he joined on-loan from Monaco in January and Leicester might be keen to sign him permanently for £40m as soon as they can with other clubs reportedly circling. James Maddison (CM) - The 22-year-old has taken to the Premier League with ease in his first year in the top flight and his partnership with Jamie Vardy continues to thrive. The possession-based, attacking style Rodgers will want his side to play suits the Englishman and he will fancy his chances of adding to either the six goals or six assists he has managed so far in this campaign at the weekend.

Harvey Barnes (LM) - The young winger has looked dangerous since he was brought back early from his loan spell at West Brom and, at just 21 years of age, there is plenty more to come although he is still yet to score for the side, something he will want to change as soon as possible. Jamie Vardy (ST) - The 32-year-old remains Leicester's biggest attacking threat and once again tops the club's scoring charts this season. Has scored five goals in the five games Rodgers has been in charge and will expect to add to that against the league's joint-third worst defence.