Leicester City beat Sheffield United 2-1 at Bramall Lane on Saturday, with Harvey Barnes scoring an outrageous volley to win the game after strikes from Jamie Vardy and Ollie McBurnie.

It was a sloppy start to the game from both sides, but the Foxes were able to dominate possession. However, they were unable to create any real chances and were struggling to find a way through a resolute Blades defence.

Chris Wilder's men grew into the game, with a gloriously struck George Baldock strike hit straight at Kasper Schmeichel. However, they were made to pay as Ayoze Perez nipped in to steal the ball on the halfway line, allowing James Maddison to collect and play a perfectly weighted pass through to Jamie Vardy, who ruthlessly fired home on 38 minutes.

United started the second half promisingly and were rewarded with an equaliser around the hour mark. Second half substitute Oliver McBurnie latched on to a Baldock cross to head home from six yards. The score remained level for a short while, until Leicester retook the lead with a truly sensational volley from Barnes into the roof of the net.

The Blades pushed for an equaliser, but they were unable to find one.

United were perhaps somewhat written off on their return to the Premier League, with many unsure if they would be able to compete at the highest level. However, they have proven in their first three games that they are not a side to be taken lightly.

Wilder's side went toe-to-toe with Leicester in the first half, with both sides carving out half chances. The defence looked solid and although Vardy was able to find the net, the Blades limited Rodgers' men to mainly midfield play. 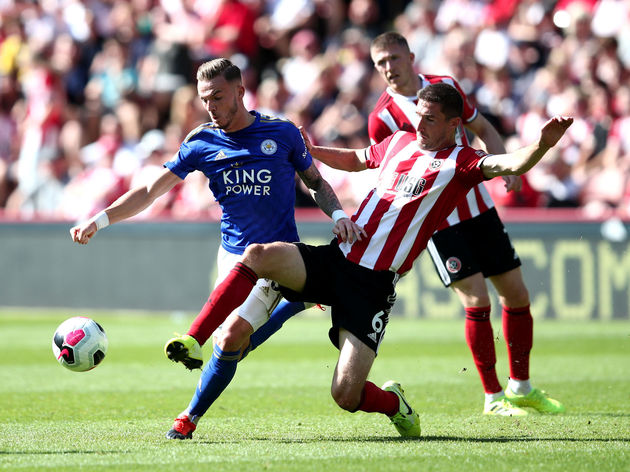 The worry for United fans is the lack of potency in front of goal, as they came into the game having only scored two goals in their first two matches. The Leicester defence was comfortable and Schmeichel wasn't worked as much as Wilder would have liked in the first half.

Club-record signing Oli McBurnie came on and changed the flow of the game with a brilliant header, and the home side began to create more aerial chances. However, they failed to take them and ultimately paid the price.

His towering header drew the hosts level and Bramall Lane erupted - with the crowd instantly forming a song for him. The Scotland international provided a focal point for the team, allowing other players to work off him and form attacks from there. Wilder will be more than pleased with the performance of his new forward, and will be hoping he can maintain this form.

Rodgers has made a point of trying to trim his ​Leicester squad, with Adrien Silva the latest player to head out of the exit door. It seems clear that the manager has an idea of what his preferred starting lineup looks like - and it was once again shown against Sheffield United.

However, the decision to play detrimental

Rodgers made the change and it immediately paid dividends, with Barnes scoring a wonder goal from the edge of the area to restore their lead. All of a sudden, the Foxes began to have an avenue down the left hand side.

Harvey Barnes volleyed Shef. United out of their own stadium.#ShuLei

It was a perfectly weighted pass that put Vardy through on goal towards the end of the half - it gave the striker the chance to take it in his stride and rifle home. The Foxes mainly played on the counter attack in the second half, but the number nine had opportunities to extend the lead thanks to the excellent link-up play with Maddison.

The attacking midfielder has made a fine start to the new season, and he was once again the main danger.

That early ball from Madders to Vardy on the good is what was missing last week. Unselfish play leading to the lovely goal there. #ShuLei

That Maddison assist though  WOW! Get that guy in the England squad. #ShuLei

Sheffield United next play host to Blackburn on Tuesday in the Carabao Cup second round, before travelling to London to take on Chelsea in the league on Saturday.

Leicester face a trip to Newcastle on Wednesday, as they take on Steve Bruce's men in the second round of the Carabao Cup. They then return to Premier League action the following Saturday, when they host Bournemouth.