At the start of December, things were looking good for Leicester City. After 16 games they had picked up 38 points, and were second in the Premier League, six points ahead of reigning champions Manchester City, and 14 points clear of Manchester United in 5th.

But just seven games later Brendan Rodgers' men have crashed harder than Jamie Vardy after his seventh Red Bull of the day. The Foxes have picked up just seven points from their last seven games, losing to struggling sides like Southampton - who they had hammered 9-0 earlier in the season - and Burnley along the way.

So, what has changed?

At their peak this season, ​Leicester were playing an attacking 4-1-4-1 formation. This encouraged their full backs Ben Chilwell and Ricardo Pereira to get forward, while getting the best out James Maddison and Youri Tielemans in advanced midfield roles. They would then be more able to win the ball high up the pitch and create chances for ​Vardy to score.

Occasionally Brendan Rodgers would field his side in a 4-3-1-2 that allowed ​Kelechi Iheanacho to partner the Premier League's top scorer, but during this poor run of form, the Foxes appear to have lost their tactical identity.

This began in the Boxing Day fixture against ​Liverpool, where Rodgers fielded James Maddison on the left wing in a bid to control the midfield against his former side. Instead it gave the freedom of the right hand side to ​Trent Alexander-Arnold - who scored one and assisted two on the night – and Leicester simply couldn’t play their natural game. He then tinkered again against a depleted ​Newcastle where he fielded a back three, and although this technically worked, it was shown up just a week later when the Foxes couldn't break down an ​Aston Villa defence that are still missing after last being spotted in ​​Kevin De Bruyne's pocket.

More recently, Rodgers has reverted to a back four, but set up his side in a more cautious 4-4-1-1 formation that has left Jamie Vardy isolated up top.

In turn, Vardy - who was already miraculously scoring at a rate - has seen his goals dry up, scoring just one in his last five compared to 11 in the eight games previous. 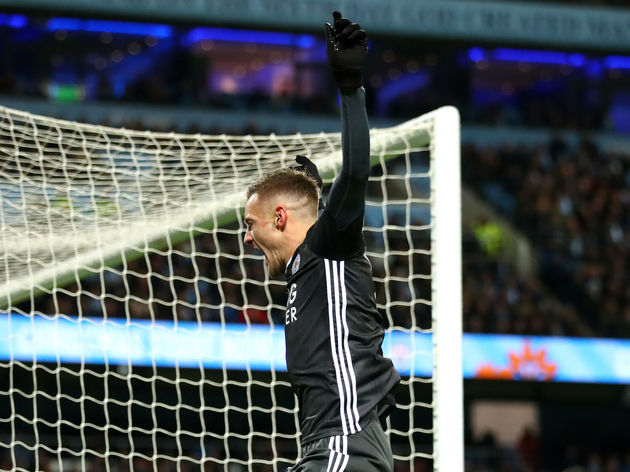 The constant chopping and changing has largely been done to account for the absence of Wilfred Ndidi.

The Nigerian enforcer gave license for the Foxes to pursue the aggressive attacking style that worked so well for them earlier on in the campaign, and without him the defensive pair of Caglar Soyuncu and ​Jonny Evans look more exposed than Paul Scholes in that photo.

Leicester have arguably profited from the inconsistency of regular top four contenders ​Arsenal, ​Manchester United, ​Chelsea and ​Tottenham to build up enough a cushion to ensure that they will probably qualify for the ​Champions League next season. But with that in mind, they should be wary of how drastically they’ve fallen apart after an injury to just one player and the loss of form of another. It does not bode well for the future.

Vardy is 33 now, and Ndidi has been linked with moves away, so the Foxes can't realistically expect to rely on them for the whole of next season, especially with the added games that come with European football.

If they want to avoid this being a flash in the pan like the last time they made it into the Champions League, then they simply have to find a better plan B.