Norwich vs Leicester Preview: How To Watch on TV, Live Stream, Kick Off Time & Team News

It's crunch time at Carrow Road on Friday night as bottom of the table Norwich take on Leicester in a must-win game.

The hosts' last win at home came against Bournemouth last month, but Daniel Farke's side have now lost three of their last four Premier League fixtures, including a 3-0 thumping away at Wolves last time out.

 “When you play such a solid side like Wolverhampton who are there with their fourth clean sheet in a row, it’s also important out of your dominance you are greedy to score."

​Leicester, meanwhile, have failed to win in their last three league matches, and lost ​1-0 to Manchester City last weekend. They haven't won away in the league since their New Year's Day victory at Newcastle, but remain in third position, six points clear of fourth placed Chelsea.

Norwich boss Daniel Farke will be without defensive duo Sam Byram - who looks likely to miss the remainder of the season - and Christoph Zimmermann, who both have hamstring injuries,

Onel Hernandez (knee) is unlikely to be involved, and Timm Klose is yet to return to first-team training.

 "I’ve had a tough year now with two injuries, right after each other and on the same knee. But hopefully I’m back in training with the squad soon, then we’ll see if I can get some games in."

Timm Klose on a potential comeback from injury ⬇️

Leicester boss Brendan Rodgers will have to assess the fitness of Kelechi Iheanacho, who suffered a head injury against ​Man City last weekend.

When the sides met back in December, Norwich came away with an impressive point thanks to Teemu Pukki's goal. They could, and perhaps should, have got more from the game, after dominating for long spells. 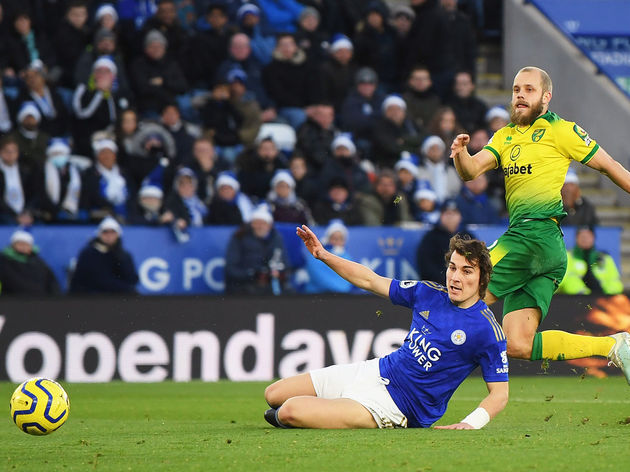 Prior to that, it was during the 2015/2016 campaign that these two last met, with the Foxes winning both home and away.

In fact, they have scored at least twice in their previous three away fixtures against Norwich in all competitions.

The Canaries have lost four of their previous six ​Premier League fixtures. But, since the turn of the year, they have managed draws against Crystal Palace and Newcastle, a win over Bournemouth, and FA Cup victories over Preston and Burnley.

Leicester's recent form has not been much better. They have won just once in their last five across all competitions, and that came in their FA Cup 4th Round win over Brentford.

Before their 1-0 defeat to Manchester City last week, they had drawn successive games to Wolves and Chelsea, and exited the Carabao Cup after their 2-1 semi-final defeat to Aston Villa.

Here's each side's previous five results in all competitions:

Norwich will know that a loss could leave them as msny as ten points adrift from safety with ten matches to go.

Daniel Farke and his players will be determined to demonstrate their fight in front of their own fans, and use their relatively solid home form - just one loss from their previous four fixtures at Carrow Road - as inspiration.

On the week of Brendan Rodgers' one-year anniversary at the club, Leicester will be keen to return to winning ways.

They will fancy their chances at doing so with a visit to the Premier League's bottom side, but as the reverse fixture suggested, it may prove more of a challenge than the difference in league standings suggest.