​The two sides began very evenly, creating several half-chances and appearing to match each other almost perfectly. It was Leicester who had the first clear look in the 24th minute, but Dennis Praet could only steer Ricardo Pereira's cross on to the outside of the post. The Foxes ended the half on top, but apart from a scuffed effort from Kelechi Iheanacho which would have been ruled out for handball anyway, they didn't create much of note. 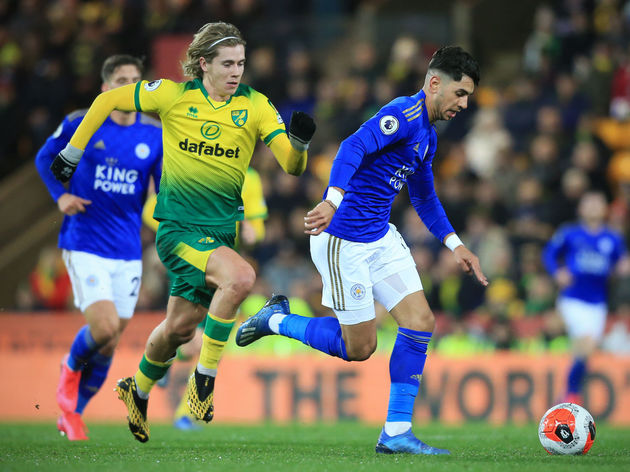 Iheanacho thought he had atoned for his error when he had the ball in the back of the net early in the second, but VAR stepped in to rule it out for handball. Leicester paid for their profligacy in the 70th minute as Jamal Lewis did manage to open the scoring with a fantastic strike from the edge of the penalty area.

As you'd expect, Norwich shut up shop after that and defended for their lives, and it worked. Leicester could not find a way through, and Carrow Road erupted as the referee blew the final whistle. Love to see Norwich win here and survive. Play good football, have a go and teams and enjoyable to watch. Unlike my team. #thfc #coys

They managed to limit Leicester to half-chances throughout, and Norwich finally managed to score from open play! It was everything the Canaries needed. This is a tricky one. As a creative midfielder, Todd Cantwell's final product was certainly disappointing, but he was easily Norwich's most likely source of goals before his withdrawal.

He always wanted possession and was willing to drive forward with the ball at his feet. He skipped past defenders and asked questions of ​Leicester, but would then make the wrong pass or run into a cul-de-sac.

Cantwell is a serious player

It's clear to see why people are so excited about Cantwell's potential, but it's also obvious that he has a long way to go. Leicester were made to line up without striker ​Jamie Vardy, who pulled up with a calf injury during training, and that really took a toll on their forward line.

Vardy is phenomenal at creating chances out of nothing, whereas Iheanacho looked to be struggling. He ballooned his best effort over the bar and failed to offer his side the outlet which the Englishman so often has in the past.

Leicester City Attackers don't supply Iheanacho as they do for Vardy

Big drop off from Vardy to Iheanacho. Blunt so far.

For all their excitement going forward, Leicester rarely asked any questions of Tim Krul, and that's simply not good enough. They need Vardy back as soon as possible. Leicester didn't have much real defending to do here, but that's partly because Jonny Evans was stopping everything with ease.

He stood up to Norwich's forward line and emerged with the ball time and time again, using his physicality to dominate the Canaries. Whether on the ground or in the air, Leicester knew they could rely on Evans.

Jonny Evans has been one of the best CB's in the league this season.
Never gets the credit he deserves.

Without Jonny Evans, Söyüncü wouldn't be half as good. Evans is so underrated by basically everyone because Söyüncü is having his breakout season.

His hard work came undone with Lewis' goal, but that was by no means down to Evans. This was the performance of a man who did not deserve to be on the losing end.

Both sides will now turn their attention to the FA Cup. For Norwich, they are set for a trip to London to face ​Tottenham Hotspur on Wednesday.

As for Leicester, they will host ​Birmingham City at the King Power Stadium on the same day.