​Newcastle United will be aiming to bounce back from successive Premier League defeats when they take on high-flying Leicester City on New Year's Day.

The Magpies were beaten 2-1 by a resurgent Everton on Saturday, before which they had been torn apart by Manchester United 4-1 at Old Trafford. Prior to their defeat to the Red Devils, Newcastle had been in strong form, winning three of their four previous matches, but back-to-back defeats has proved somewhat of a reality check for Steve Bruce's side. Speaking of reality checks, let's move to Leicester. The Foxes hadn't lost a single game since 5 October before they took on challengers Manchester City and Liverpool in the space of five days, but were humbled by the English champions and then the world champions on Boxing Day.

Brendan Rodgers decided to field a makeshift team in their last outing, but the east Midlanders triumphed over West Ham with a commanding 2-1 victory. The fresh legs of the first team will undoubtedly return at St. James' Park as the Foxes look to close the gap to league leaders Liverpool.

​Newcastle's injury list seems to be getting no shorter any time soon with a number of first-team players sidelined. The creative influences of Allan Saint-Maximin and Ki Sung-Yueng are still out, while the defensive trio of Jamaal Lascelles, Ciaran Clark and Matt Ritchie remain unavailable.

Welshman Paul Dummett has a very slim chance of making the game, while Joelinton and Saturday's goalscorer Fabian Schar will most likely play through small knocks. Rodgers made nine changes for Leicester's 2-1 away win over West Ham, with almost all those who fell out of the team in line to return. The great news for the Foxes is the return of ​Jamie Vardy, the league's top scorer, who missed the trip to London as his wife gave birth.

James Maddison, Wilfred Ndidi, Caglar Soyuncu, Ricardo Pereira and Youri Tielemans are among the big names that should return to feature against the Magpies.

Leicester City beat Newcastle United 5-0 when the sides met at the King Power Stadium in September and have won on their last three visits to St James Park in the Premier League. 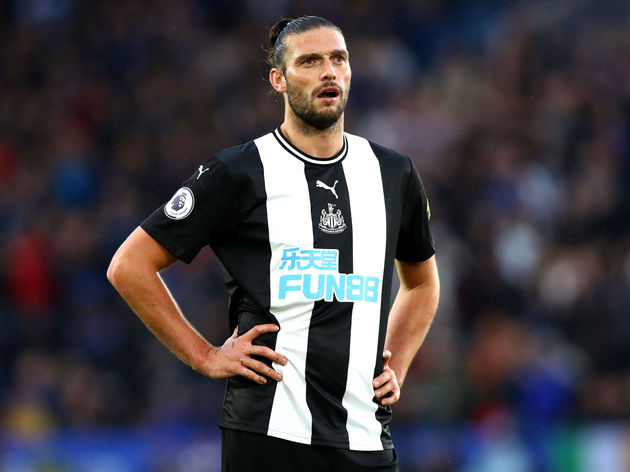 Second-place Leicester returned to winning ways against West Ham last time out and have 42 points from their opening 20 league games - two more than they had at the same stage in their title-winning campaign of 2015-16.

Newcastle enter the match on the back of defeats to Manchester United and Everton and are at risk of losing three in a row in the top flight for the first time since October 2018.​

These two teams have met 126 times in the past, Newcastle edging the contest with 53 victories to ​Leicester's​ 46, while there have been 27 draws. The pair have faced each other twice already this season, once in the Carabao Cup and once in the Premier League.

The Foxes narrowly beat Saturday's opponents in the first round of the cup, triumphing on penalties, while the league meeting was far more comprehensive, a 5-0 humiliation for Newcastle at King Power.

Successive defeats for Bruce have left Newcastle in 11th heading in to 2020, seven points off the drop zone. The Magpies will be buoyed that they are closer to Manchester United in fifth than Aston Villa in 18th, but they will need to improve their recent performances if they want to compete with Leicester.

The real issue for Newcastle has been scoring goals, netting only 20 Premier League goals in as many games, exactly half of which have been scored by defenders.​ Even clean sheets have begun to allude the Toon Army, who have kept just the one in their last five matches. Despite recent defeats to ​Liverpool and ​Man City, Leicester are still sitting pretty in second place, 11 points clear of Man United outside the top four. The Foxes, who once boasted the best defensive record in the league, have struggled at the back, conceding eight in their last three matches, as well as failing to keep any clean sheets in their last six games in all competitions.

Leicester's 4-0 defeat to Liverpool on Boxing Day was the first game in which they have not scored since 14 September, with talisman Jamie Vardy leading the league's scoring charts with 17. Meanwhile, ​Kelechi Iheanacho's goal against the Hammers last weekend was the fifth goal he has been involved in during his last four appearances, a remarkable stat given the Nigerian's lack of involvement at the beginning of the campaign.

A trip to St. James' Park is never a simple proposition, but Leicester will feel confident of getting a crucial victory. The Foxes can ill afford to start dropping points now, or else they risk making Champions League qualification far more awkward than it needs to be. The returning members of the Leicester starting lineup will bolster the visitors, and undoubtedly make life a great challenge for the hosts. However, Newcastle know how to frustrate big sides, having already taken points off Tottenham and Manchester City this season. A stoic defensive display and a dash of quality on the counter-attack could offer the Magpies some much-needed respite with an important result.