Leicester Report Card: Mid-Season Review for the Foxes in 2019/20

​We are at the halfway point of the Premier League season and Leicester City are defying the odds... again.

Despite the Foxes' difficulties at the beginning of 2019, the arrival of Brendan Rodgers has catapulted his side amongst the best in the country, as Leicester reside in second place. 2020 promises to be just as successful as the predecessor, with Rodgers' side pushing to stay in the top four.

As Leicester take a minute to regroup and maintain their extraordinary form, here is 90min's verdict on their emphatic season at half time, and what we can expect in the second half. There is not much to say about Leicester's league performance that would do it justice, other than it has been an absolute pleasure to witness. Thumping victories, such as a 9-0 drubbing of Southampton and comfortable 5-0 win against Newcastle, have given Leicester a platform to mount a challenge for the top four.

Jamie Vardy has reignited his title-winning form and leads the league scorers chart with 17 strikes. For a 32-year-old who did not make his Premier League debut until 2014, he has certainly made a name for himself.

Leicester won the Premier League in 2016 and that's regarded as one of the biggest football miracles in history, and have since been a regular in the top half. Now that they have broken into the top six, they have a 10-point lead on fifth-placed Tottenham, and will be reluctant to give that up. ​Just like the league, Leicester are over-performing in the League Cup too. Maybe they just are that good...

The Foxes are set to play Aston Villa in the semi-finals of the Carabao Cup after defeating Everton on penalties, and it seems that Rodgers is going for silverware. Playing fairly strong sides against inferior opposition in prior rounds, Leicester look set to continue the trend against struggling Villa. Pinpointing Leicester's biggest strength may be a difficult task, considering they boast the third best defence and attack in the league. For a club of Leicester's stature and the quality that other clubs possess, that is quite remarkable.

But perhaps the biggest strength of Leicester's is the mentality instilled into the players. A never-say-die attitude, and the belief that they can beat anyone. This has been reflected in their league position and the calibre of opposition that they have beaten this term. Victories against Sheffield United, Arsenal and Tottenham have propelled Leicester amongst the best. ​Leicester's biggest weakness, which may be the catalyst for their recent bad results during a congested fixture period may be their lack of quality in depth.

Outside of the first team, the Foxes cannot rely on many to deliver the same results that their stars have. Ayoze Perez, Marc Albrighton and Kelechi Iheanacho have not delivered the same numbers as James Maddison, Harvey Barnes and Vardy.

With Premier League games coming thick and fast, as well as the FA Cup and League Cup to worry about, Leicester's second-string players will have to perform when called upon and showcase why they deserve to be in the team. Although Leicester's players have stepped up when called upon this season, they still need to provide cover for Vardy, as well as more depth in defence. A spending spree is not needed, but if Vardy was to suffer an injury, Iheanacho would have to step up.

Rodgers does not need to change the perfect balance of his starting line up, but to challenge for the cups and a spot in the Champions League, further quality cover is needed for a number of areas of the pitch. No discussion. Leicester's best player has been Jamie Vardy. Thank you, and goodnight.

17 goals in the Premier League this season in just 19 games has set him aside from the rest. A hat-trick in his sides 9-0 victory at Southampton, as well as scoring in eight games in-a-row has put Vardy's name back in the hat for best striker in the league. The Englishman has scored in all-but-seven games in the Premier League, which is remarkable for a 32-year-old.

20 goal involvements all season, as well as October's Player of the Month, has not only cemented Vardy as one of the best, but catapulted Leicester back up the table following a couple of years of stagnation. The Foxes have set themselves up for an inspiring second half of the season, sitting 10 points clear of fifth place. With Liverpool out of the way for the rest of the season, Leicester can look at most of their fixtures with great optimism, considering the Reds have been responsible for 50% of their losses.

Rodgers will be licking his lips at the prospect of a cup final not 12 months after making the switch to the King Power. Aston Villa are the only side to stand in his sides way, and seem an easy opponent, but the cup can be unpredictable and they will have to stay focused. The FA Cup may not be relevant to the Foxes should they reach the Carabao Cup final. 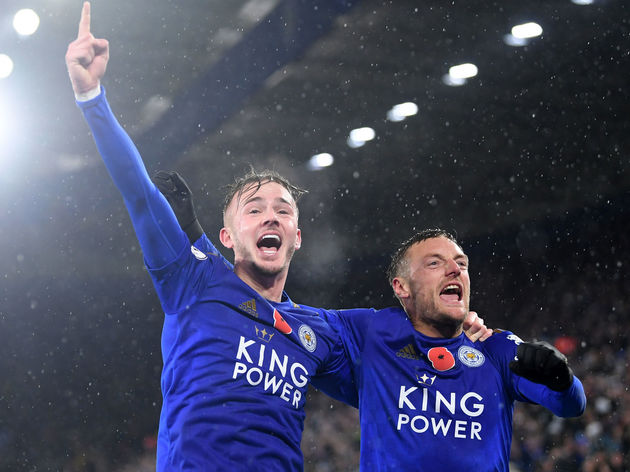 Leicester fans and staff alike will be ecstatic ab​out the start that they have made, and will be looking forward to a prosperous 2020. They were sitting on the same amount of points at this stage in the 2015/16 season as they are now, which indicates progress and consistency behind the scenes.