Leicester recorded their biggest ever Premier League win on a miserable day in the Midlands, as a double from Jamie Vardy, strikes from Ricardo Pereira and Wilfred Ndidi and an own goal from Paul Dummett piled the misery on ten-man Newcastle.

It was a fast start to the game with both sides showing clear positive intent, and the best early chance fell to former Magpie Ayoze Perez, who could only direct an effort straight at Martin Dubravka from close range after some excellent work from Harvey Barnes.

The home side quickly took control, however, and after Youri Tielemans saw an effort deflect wide from a tight angle, Pereira took it upon himself to produce a moment of magic, taking the ball inside his own half before cascading past the ​Newcastle midfield and opening the scoring with a fine left-footed effort.

The goal seemed to add to the Foxes' already soaring confidence levels, and their grip on the game strengthened on 43 minutes, when Isaac Hayden justly saw red for a horrific challenge on Dennis Praet deep inside the Leicester half.

A superb run and finish from Ricardo!

More goals looked inevitable, and a quickfire double put the game to bed within 12 minutes of the restart. Vardy first picked up his obligatory goal when his low drive somehow crept under Martin Dubravka from a tight angle, before an attempted cross by Praet deflected in off Dummett to make it three.

It quickly turned into a rout, and after Vardy made it four with his 14th in 17 appearances under Rodgers, Ndidi put the icing on the cake with a lovely turn and finish on 90 minutes. 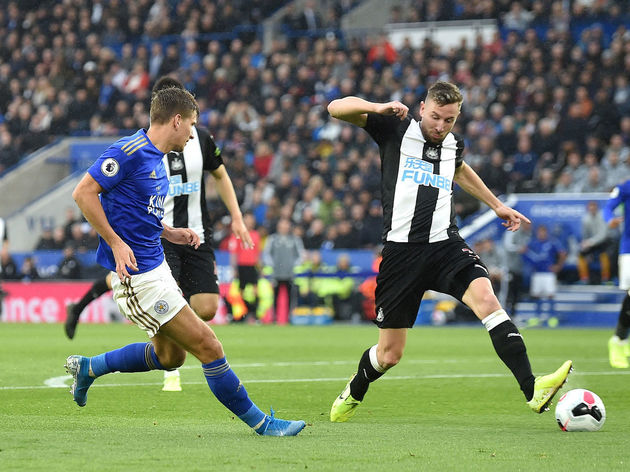 For the first time since Rodgers took over, Leicester started a league game without James Maddison, as the match-winner from a week ago was forced out of this one with injury.

The show went on, though, with Praet starting in the only change, the Foxes boss once again proving continuity is key to his side's chances of breaking up the top six cabal.

Ricardo was among seven players who have started every ​Premier League game so far this season, and his moment of magic - playing a one-two with Perez before taking off and unleashing a memorable strike - was no more than his side deserved. In truth it was a little less, as they could easily have been three or four up by the break, but they attained their just desserts with a rampant second half display that saw Vardy and a Dummett own goal pile the misery on their visitors.

Ultimately it was a comfortable win that sees the Foxes go third on merit, and with every passing week their prospects of European football in 2020 are looking more and more likely.

Harvey Barnes is always good to watch. So direct.

He was a constant threat down the left, driving his team forward and showcasing a juxtaposing brand of directness and subtlety that makes him such a unique talent.

He's yet to fully establish himself as a starter, finding himself in and out of the team so far this season. But if he keeps taking his opportunities in the manner he did here, it won't be long before he's one of the first names on the team sheet and being touted for England at Euro 2020.

The Magpies were looking to move clear of the relegation zone after an inconsistent start to the season, and to do so, Steve Bruce made three changes to the side who drew 0-0 with Brighton last time out.

Going to a back four, Emil Krafth, Sean Longstaff and Yoshinori Muto came in for Javier Manquillo, Jetro Willems and Jonjo Shelvey, making up a starting XI that looked positive - perhaps reflective of the importance of a win at the beginning of a run of games that sees them face Manchester United and Chelsea in their next two.

They were also buoyed by the fact that they were, to date, the only side to have beaten Rodgers' Leicester at the King Power Stadium, having done so back in February. But as much as they looked tidy on the ball at times, they never truly looked like repeating that feat here. A first half in which they showed next to no attacking quality was summed up when Fabian Schar pinged an ambitious cross-field pass that evaded Yoshinori Muto by a good 20 yards, and it went from bad to worse when Hayden saw red shortly before the break.

There was to be no unlikely comeback as the second half, in miserable weather conditions, was equally dire from a Magpies perspective. Playing with ten men is difficult but it was a fragile performance from Steve Bruce's men, and the manager will know serious improvement is needed if they are going to avoid the drop.

It was clear to see why he so often frustrates fans, as he was once or twice caught dwelling on the ball, but Atsu tried to drive his side forward in the first half and showed some quality, which was sorely lacking anywhere else for the Magpies.

Leicester have the unenviable task of travelling to Anfield next week, a fixture they know will be tough but represents a great opportunity to assert their top six aspirations.

​Newcastle, meanwhile, head back up north to host Manchester United.