​Leicester City manager Brendan Rodgers has confirmed that striker Kelechi Iheanacho has been given the all-clear to return to action after suffering a head injury during Saturday's 1-0 loss to Manchester City.

The Nigerian collided with City goalkeeper Ederson during the first half but continued until the interval, when it was determined that Iheanacho had to be withdrawn as he was suffering from a suspected concussion. 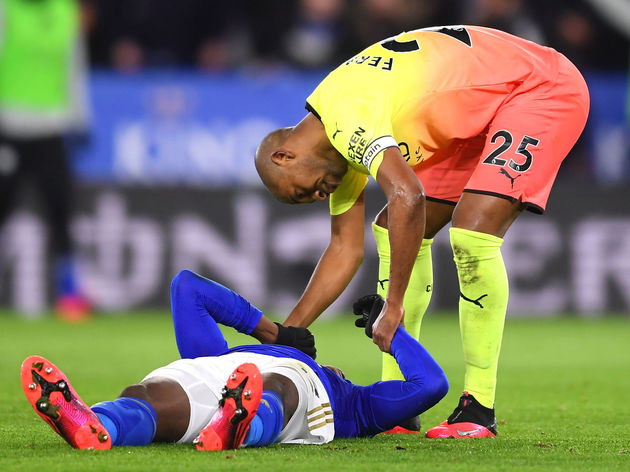 ​Premier League regulations state that any concussed player must remain sidelined for a minimum period of six days, and Rodgers confirmed (via the ​Leicester Mercury) that Iheanacho will be ready to feature against ​Norwich City on Friday after following the protocol.

“There’s an enhanced care procedure in place but he’ll be available for Friday,” the boss revealed.

“We’ve gone through the protocol from the game, so he’s obviously not in contact but he’s been training and working, he’s done similar to what all the players have done who have been in contact. When the time comes, he’ll have passed through the procedures." Rodgers went on to reveal that Iheanacho actually wanted to continue playing, but ​Leicester's medical team took the decision out of his hands after deciding that something was wrong with the forward.

“He felt he could maybe have gone on, but he looked a bit groggy at half-time," he said. "I always have to go with the medical team, and the advice was he was better coming off.

“But he’s recovered well. He’s been his normal self but we have to take care, which is the right thing to do. “After the game, we were showed it again, and it’s not something you want to see again. The run, and the courage he showed, was absolutely incredible. He’s a tough boy.”

Leicester will hope to get back to winning ways against the ​Premier League's bottom side on Friday. They have won just two of their last nine games - including an FA Cup victory over ​Brentford - and have now fallen well behind ​City in the standings.